I had a long conversation with my Brazilian roommate this week about Marx and the definition of alienation. It was spurred in large part by a debate I got into with his social economics professor. The idea of alienation has been on my mind ever since. 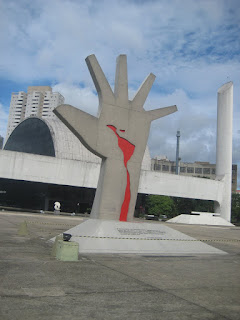 I really want to discuss how landscapes can alienate, and show some examples from a museum here in São Paulo, the Museu de América Latina (Latin American Museum), but first I need to write through my misunderstandings and doubts that I have with regards to Marx's concept of alienation.

Based on the conversation that I had with my roommate and the debate that I entered into with his professor, I understand alienation to be the tendnecy humans have to see other human beings as objects instead of as fully realized human individuals. In other words, when you look at me, all you see is the skirt I'm wearing, the fact that I'm probably North American or Western European, that I've got dandruff on my shoulders, that the shoes I'm wearing are last year's Blue Light special, and that I'm hopelessly lost. What you don't, necessarily, see is the inside color of my soul (it's deep fuschia, fyi), the fact that I decided and then promptly undecided ten times this morning to get out of bed, the fact that I enjoy watching other people. In order to understand me on this level, without taking any of my physcial appearance or culturally imposed mannerisms (I said hello when I saw you, how polite! But I didn't hold the door, how rude!) into account, you would successfully be seeing me in an unalienated manner.

My objection to this criticism is that yes, we're all shallow creatures, we read what you're wearing for social clues. But it wasn't capitalism that made us this way - kings and princes have always worn crowns, monkeys have silverbacks, peacocks have rainbow plumes. Marx successfully points out how our human instincts correspond with the animal world - we make judgements on first sight. But Marx goes further to insist that we should be able to eventually overcome these limiting instincts and be able to understand each and every human, to recognize and acknowledge each's individual desires, the essential nature of every human being.


Marx, one question: what if the guy I just met yesterday, the one who's smelly breath and greasy shirt gave me shudders, at his essential nature, wants to eat me for dinner? This view there is enough space in the world for each and every man to achieve his own desires, that is that the desires of an individual exist in a vacuum. Or in other words, that I can express and enact my essential nature without limiting or infringing upon the expression and enaction of another's essential nature.

Unfortunately for Marx, human being desires and "essences" are often based in and around other human beings - the same relationships that we all have with one another are the underlying cause for our fetishism with objects, our need to display wealth and power. Someone is always going to want to be a Bonaparte, a Cesar Agustus, a Barak Obama - to have power over others. The essential nature of people is to want and desire things of other people, be it power, love, understanding, atention - and we use objects, our money, storytelling, our personalities to do so.

Let's return for the moment to my classroom debate with the professor on Tuesday. His point was that we cannot overcome alienation. So let's say that I decided that the essence of my being was such that I desired, desperately, to never wear shirts. So I remove my shirt in the middle of class. In this hypothetical situation, let's say that the site of a shirtless girl in the middle of his classroom greatly disturbs the professor, to the point where he is no longer able to conduct class. He has a great desire... to have me put my shirt back on so that he may finish his lecture. In this situation there is a conflict of desires, of essential natures. I don't want to give up my ablity to air off my torso; my professor wants to finish his class. A third student comes up with a compromise: the professor will pay me $50 to put my shirt back on. I'm trading my desire to remain shirtless for $50.

Desires, these essential natures of ourselves, are an expression of our personal power or force of will. We use the desires of others to get what we want - money often acting as the intermediary. In the above example, the student traded her power over the sentiments of the professor (a form of sexual power) for cold hard cash (economic power). Without monetary power ($50), the professor would have been unable to get what he wanted - finishing his class on time.

To conclude, the assertion that alienation is a product of a capitalist system is bull. Marx couldn't figure out how to manipulate his human desires and connections into actual power that would get him what he wanted - so he called everyone that was aware of these powers of desires and successfully (or unsuccessfully) used them "alienated". From this perspective, Marx's alienated individuals are in fact wiser than Marx himself: instead of writing a long critique of human nature, they used their knowledge of the very same human nature to accomplish what they wanted. (or at least tried to).

Marx's personal life aside, alienation as an emotion exists: at times we feel distant, isolated, cut off from all emotional contact and acknowledgement. Landscapes, often our surroundings, can be the greatest provocatuer of alienated feelings. Being the last car in an empty Wal-Mart parking lot on a Tuesday afternoon. Walking alone down a badly lit business district in the depths of a Sunday night. Or, in my case this week, visiting the Latin American Museum in São Paulo.

Designed by Oscar Niemeyer, Brazil's most notable Modern architect, the musuem is another classic example of the architect that influenced the design of Brazilian buildings to this day.

This was not my first Niemeyer - I had made it my goal while in São Paulo to track down as many of his works in the city as possible. I've already visited his famous church at Pampulha in Belo, seen the eastern most building in Brazil (also his) in João Pessoa. I've seen pictures of Brasília. 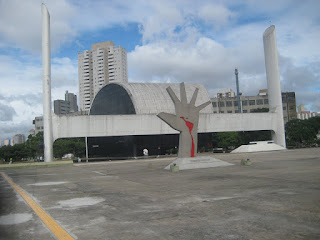 Niemeyer's sweeping curves of concrete, vast empty plazas, and glass arches must be beautiful on paper. And within the first few weeks of completed construction. But the wear and tear that acid rain and grass runners wreak on these ideals is often less than desireable. 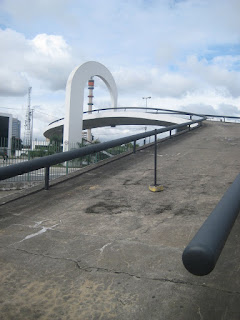 The plaza for the MAL felt like an abandonded parking lot. A few, unoccupied concrete benches were the only thing filling the vacant space; they looked misplaced, as though the truck on the way to the neighborhood park had forgotten where it had left them. The buildings white exteriors were marred with greenish
streaks - eiher algae growth or acid rain stains. The fountain around the Sala das Artes had a faint organic smell wafting off of it. There were no trees, no shrubs, no foliage except the weeds growing at the bases of the benches and in the cracks between the enormous concrete slabs that formed the plaza. There was a passarela (walkway), an out of place grandiose curl of concrete, unused since the Phantom Tollbooth closed its doors. 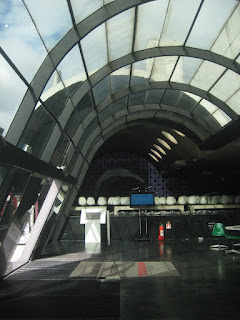 Niemeyer, perhaps not unlike Marx, designed and planned his ideal buildings in a world without nature. On paper, arches stay white and plazas always have that Modern couple on heading towards a packed auditorium. In drawings, you have perspective on the building, on the space. In reality, you must confront these spaces as an individual, on two feet, consciously aware of every solitary instant that you cross a weed-edged plaza. Ironically, perhaps it's here that Marx's "unalienated" individuals would feel most at home. 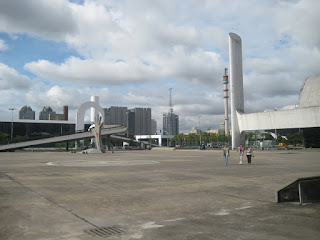