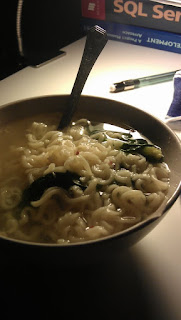 I'm not anti-recipe, but I've definitely moved away from using them as of late.
Here's one of my latest concoctions. Main credit goes to Meizi Mao, my roommate at Wal-Mart during the summer of 2010, who introduced me to my first variation on ramen. A recent discovery that Siracha sauce has sugar as the second ingredient had me getting creative with the spices. Tonight's version was definitely my favorite so far, as the lime added a nice fresh kick.

Spicy chicken ramen with lime
Bring about 1cup and a half of water to a boil. (We're talking about two inches of water in a medium/small pot). Add ramen noodles, saving the packet of chicken flavoring for later. Add the washed and de-stemmed spinach leaves Crack the eggs into the pot.
Cook for about three minutes, boiling.
Squeeze in the juice from half the lime, add about 3/4 teaspoon cayenne powder, and a couple of shakes of the red chili pepper flakes.
Add in half to 3/4 of the chicken flavoring packet.
Stir carefully, so as not to break up the eggs. For best results, don't stir until you've got to about this point (at the end of cooking).
Enjoy! I serve my first bowl over a few pieces of ice, but I'm impatient.
at October 09, 2011

Email ThisBlogThis!Share to TwitterShare to FacebookShare to Pinterest
Labels: food