My first ever seedlings have sprouted. And like a good momma, I can't remember who I planted there. It's a toss up between the spinach or basil. I'd be tickled beyond belief if it actually is basil - I've been quietly lusting after the seedlings at the urban harvest farmers market for the past two Saturdays now. And outside the HEB and Whole Foods. Every sprig I see in the produce bins has me dreaming of pesto.
Its been almost a year since Junior passed, the basil plant I bought at a farmers market in Fayetteville, AR in late June two summers ago. He sat out in the stairwell at my apartment complex, catching sun during the afternoons while I worked in the Walmart catacombs. He was my first real plant, and he almost didn't make it, until a coworker, Rich from Arizona with a knack for growing plans, took notice.
That fall, he rode shotgun all the way back to Texas, passed the winter in a sunny window and return kept me and my roommates in pesto. Though I'm still working through forgiving the one that butchered his leaves for a dish he had picked up the recipe for on a vacation to the Italian country side.
I repotted him only once, into the biggest pot I could find at Home Depot. Pulled him up straight by the stem - his roots had consumed the soil beneath him until there was nothing but Junior top to bottom. I had to loosen him up for the new pot, tearing at his tightly bound coils. They made a ripping sound not unlike tearing knotted hair from a brush.
I tried not to let on how much I would miss him when I passed him into the hands of a friend that January. She had volunteered to watch him while I spent a spring chasing stale dreams in Sao Paulo.
He was just a stick in a bright clay orange pot when I returned in early June. It hurt to see, but I knew it wasn't him. His life was in his leaves, the way he'd perk up at sunshine, or crackle with joy in a much needed watering session, not a bare stick someone had thrust haphazardly into a pot. My friend claimed I should have known better than to entrust her with something living.  But I didn't blame her.  To me it was just proof of dependence - he'd withered without me and that was a burden I would have to carry.
Murder by abandonment.
It's spinach. It has to be. I put the basil seeds on the right side, and in an absent minded mix up left them buried unwatered.  I could just buy a new one. But I fear it would die of neglect - a guilty conscience can't love. No, I'm waiting for basil to sprout for me.  For it to push aside the soil, pulled up by the clouded rays of early spring sun, and blossom: forgiveness. 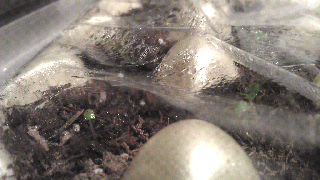