Training plan:
Run a lot. Concentrate on doing lots of 13-14 mile runs and just getting the mileage in. No scheduled speed work or tapering.  I also stopped eating cane sugar in August, as an attempt to make training a bit easier.

Running gear:
Shoes: Feelmax Osamas, no socks.
Top: Long sleeve black thermal shirt layered over Etsy running club shirt.
Bottom: Cotton, unpadded bike shorts under bright green shorts.
Hands: Black, cotton gloves.
Head: nothing originally. I grabbed a discarded Dunkin Donut's fleece hat (they were handing them out at the start village, but I didn't manage to figure out where) right out of the gate, before we headed into the wind tunnel of a Verrazano bridge, and ditched it on the other side.
Outer wear (to be tossed): Sweatshirt (no hood) and some thin fleece pants.

The Start:
This was by far the worst part of the whole marathon experience.  I woke up at 5:30am with my alarm, and biked the two miles from my apartment to the Staten Island Ferry.  My bib had me scheduled to be on the 7:00am ferry, but since I was early, I went ahead and got on the 6:45am one.  I don't think this was a huge deal - arriving later may have saved me some time in the cold, but not a whole lot. The ride over to Staten Island was pretty pleasant, the bus ride from the ferry terminal to the start fairgrounds was not - it took a long time and I was standing up.

Our marathon advisor at work (he's run a zillion, and is more or less responsible for sending out announcements about us to the rest of the company) suggested dressing warmly for the start village. I didn't have time to make a run to the thrift stores for extra warm tossables, so I decided to ditch some much beloved, old sweats instead.  I made a huge mistake in not bringing a hood and/or a hat and socks.  The wind at the start village was freezing, and to make it worse, there was little shelter in my start village.  The wait was also interminable.

I arrived off the bus around 8:00am, I didn't start until 10:05am.  This is considerably later than my usual run time of 8 am.  I ended up just sitting on the ground, shivering while slowly eating the bananas and cheese blocks breakfast, while trying to warm up my feet. Some nice German guy literally saved my ass by letting me have his tarp-blanket, so I wasn't sitting on cold asphalt.  I probably should have looked for a place more out of the wind, but was too cold to move.

Around 9:15am, I gave up on my feet, checked in my bag (and the warm clothes that I didn't want to toss), wrapped myself in my tarp-blanket, and went to go wait in the corral.  There was about a 20 minute wait before we started moving up toward the starting line.  I ditched the tarp blanket then.

My feet are really sensitive to cold.  At the slightest suggestion chill, they proactively shut down and turn themselves into white, bloodless blocks of icy flesh.  When this happens, most sensation in them is lost.  Unbeknownst to me, they had been in the process of shutting down while I was waiting.  I didn't realized how bad the situation was until I started jogging up towards the start line.  I had no idea where my feet were.  On one foot, it felt like I was running on my heel (that was where the sensation ended), on the other a fleshy piece of the ball of my foot that wasn't numb was screaming like I was mashing it between a rock and hard place (the hard place being the rest of my foot, which was frozen).  It was like running on blocks of unfeeling flesh.

Verrazano:
The cannon went off to mark the start, and off we went.  I was in the Green corral, which meant we started on the lower level of the Verrazano.  It was literally a wind tunnel.  Luckily, not a headwind - it came from our left side (North), whistling between the levels.  Some people lost their hats.  It was a bit of a struggle to stay on my feet.  Already unstable as I couldn't feel where my feet were hitting the ground, gusts of wind would drive me a foot or two sideways, usually into the next person.  It was rough, and by the end of it I was seriously doubting how on earth I was going to finish the next 24 miles with ice block feet.  Luckily, by mile 3, my feet had come back to life and the wind was back to fairly normal.  Looks like this race is happening after all. :)

The Race Plan:
I intentionally did not wear a watch or set a pace goal for this race.  I was counting on diet, consistent practice, and "bare" feet to provide a bit of an advantage.  Here's the pre-race plan that I came up with last night:

Tomorrow's goal is to have fun.  To run free. I won't be wearing a watch.  I'm not going out super fast.  The first 5 miles are gonig to be warm up.  I'm going to just focus on keeping moving, and working the fuzzies out of my brain.  The next 7* miles (this will take me up to the half way point) will be zoning in on form - making sure that I'm keeping my feet low and the bounce -out- of my step.

The next seven* will be on rhythm. I'm going to run mile 13 to mile 21 in a steady beat, the same one that I've established over the first 13 miles.

The last five will be pick ups. Can I drum my feet a little quicker, shorten my stride without losing form?  Push my heart rate up a little bit, giving a good swing at the pace. So that on mile 26, I'm effortlessly flying up hills, and around the corner to the finish.

* Math is hard.  8 miles is the actual rest of the distance.

How It Panned Out:
The five mile warm up was a good idea.  When my feet turned out to be ice blocks in the first three miles, I just counted it as a part of getting warm.  If the had still been blocks at the 5 mile mark, I may have tried to do something, but it worked out.  Here's my splits -- they're pretty awesome for warm up.

The next 8 miles to the Brooklyn/Queens bridge was the (as expected) easiest part.  Having a goal of just coasting through this portion kept me from lighting off in a fast frenzy when the mood struck me.  It's also some of the most populated for cheering.  The first 10+ split was a bathroom break, the next 10:min dip was the bridge (I think).  Overall, I was pretty happy with my splits.  Pushing it here would have meant times closer to 8:30, but I kept them hovering at or around 9:00s, which was where I would have needed to be to hit a 4:00hour finish. 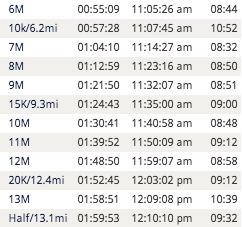 The next 8 were pretty good too. I freaked out a bit when I hit the 16 mile mark -- this is where I cratered in Toronto 2 years ago, but 16 and 17 passed without much ado.  By the time 18 and 19 rolled around, I was starting to get worried about the upcoming wall -- still moving pretty well, but not as fast.  Somewhere between 18 and 19, in an attempt to stave off an imagined upcoming crash, I ate half a banana.  I few minutes later my stomach started cramping -- oops.  I'm not sure if this contributed to the huge slow down, but I'm pretty sure it was a terrible idea.  It's hard to tell though if this actually did stave off later problems or what, but either way it wasn't good - my average time moved from the 9:00 mark up to the 10:00 mark. 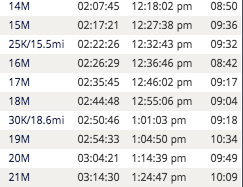 The last 5 were not pretty.  My leg muscles started cramping.  I forgot why I was even trying to run a a marathon.  According to the plan, this is when I was supposed to be pulling up my stride, and starting to let loose, but I couldn't find the motivation to keep moving. Everything hurt.  The finish seemed so far away.  Looking at my times, you can see when I did get motivated again -- when I ran into my roommate and her boyfriend who were cheering for me around mile 25 in central park.

I'm pretty proud of the last two splits -- as soon as I realized that the hellish ordeal of running 26 miles was almost at an end, I decided I could in fact get the hell out sooner.  I finally started tightening up my stride, pushing more of the work into my quads and hips.  It was a really good finish - I just wonder how it would have ended if I had started kicking it in a few miles earlier.  I definitely had the energy, just not the motivation.  Also, running faster might have helped with the muscle cramping -- running faster uses different muscles. 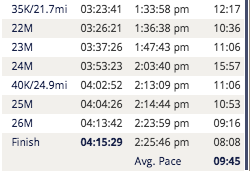 Overall, I'm really happy with the whole day.  Big thanks to everyone that came out to cheer me on -- friendly faces were a welcome sight!


Mistakes that I'd fix for next time:
- Bring socks and a hat for the start village.

Things I'd like to experiment with:
- No eating during the run.
- More speed workouts during training.
- Bringing headphones and music for the last 5 miles.  I intentionally didn't bring them because A) I didn't want to carry them, and B) I would have had to wait to the last 5 miles to put them in, so as not to get out of the gate fast too early.  I was counting on the bands, but they went by so fast that it wasn't long enough to get my feet moving, which was what I really needed at this point.
- Wearing my name on my shirt.  Having people yell your name in encouragement is a game changer. More of this would have been awesome.
- Getting friends to cheer from the Bronx/Upper Manhattan.  This stretch was long, and psychologically hard.  I got a huge boost from seeing friendly faces 2 miles from the finish -- maybe having someone push me around mile 21 would have helped me get over the "wall" of pain and second guessing earlier in the race.
- Not flying back from Europe the day before.  My clock was off, and I felt energized really early in the morning.  This may explain why the last 5 miles were so rough -- it was late in the day (in London time).
at November 02, 2014